After the long-running saga of the wool trousers, I fairly sped through my latest sew- a satin top. I used Burda 7079 and made view A. Well, I decided I 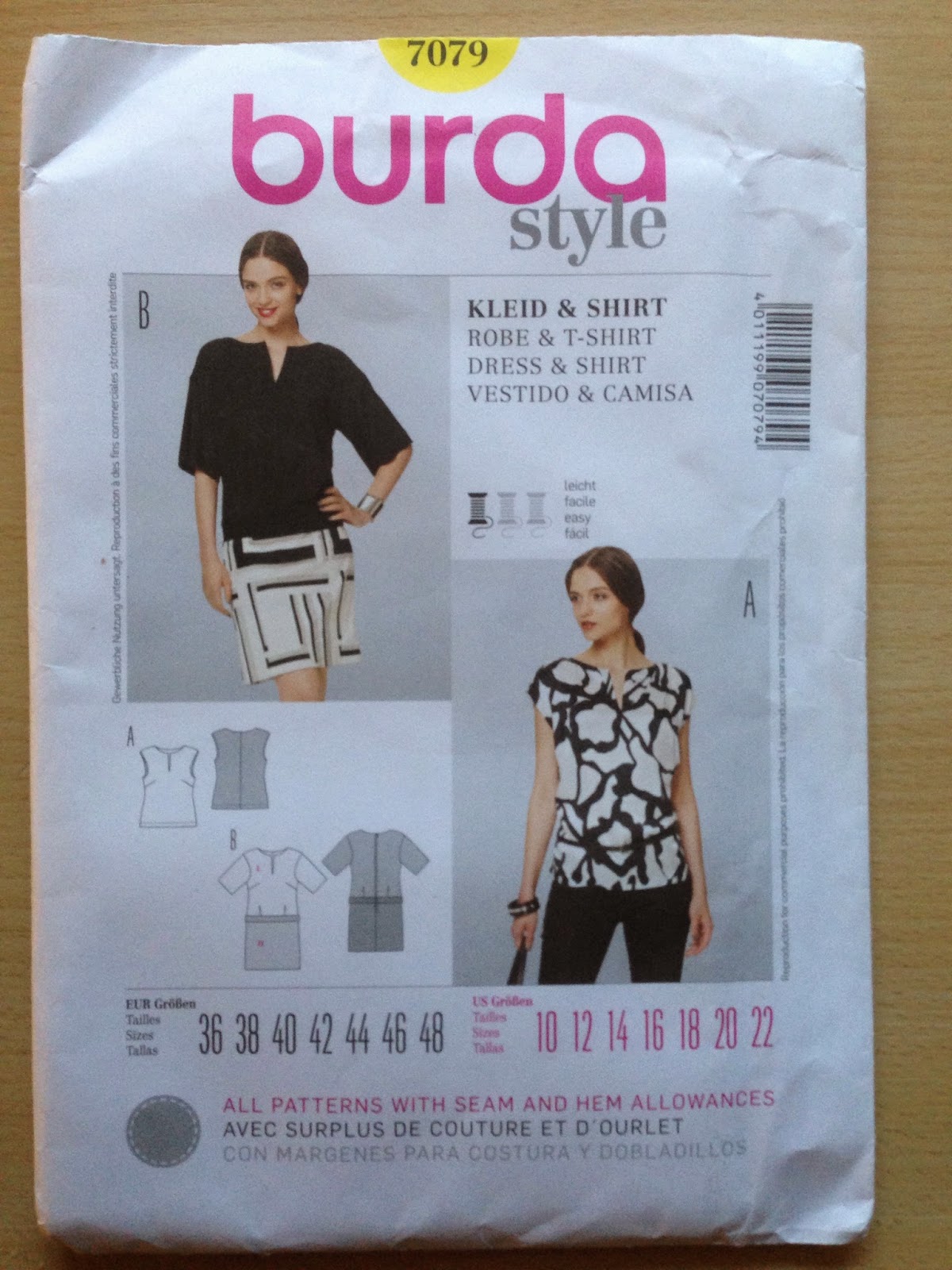 wanted more of a plain top, without the notched neckline...so apart from that, I made the pattern more of less as it is. Well, except I decided not to use facings and made some bias binding using the fabric, and finished the neck and sleeve edges with it.

I wanted as plain a  pattern as possible to let the fabric be the star! Speaking of which, here's the fabric- 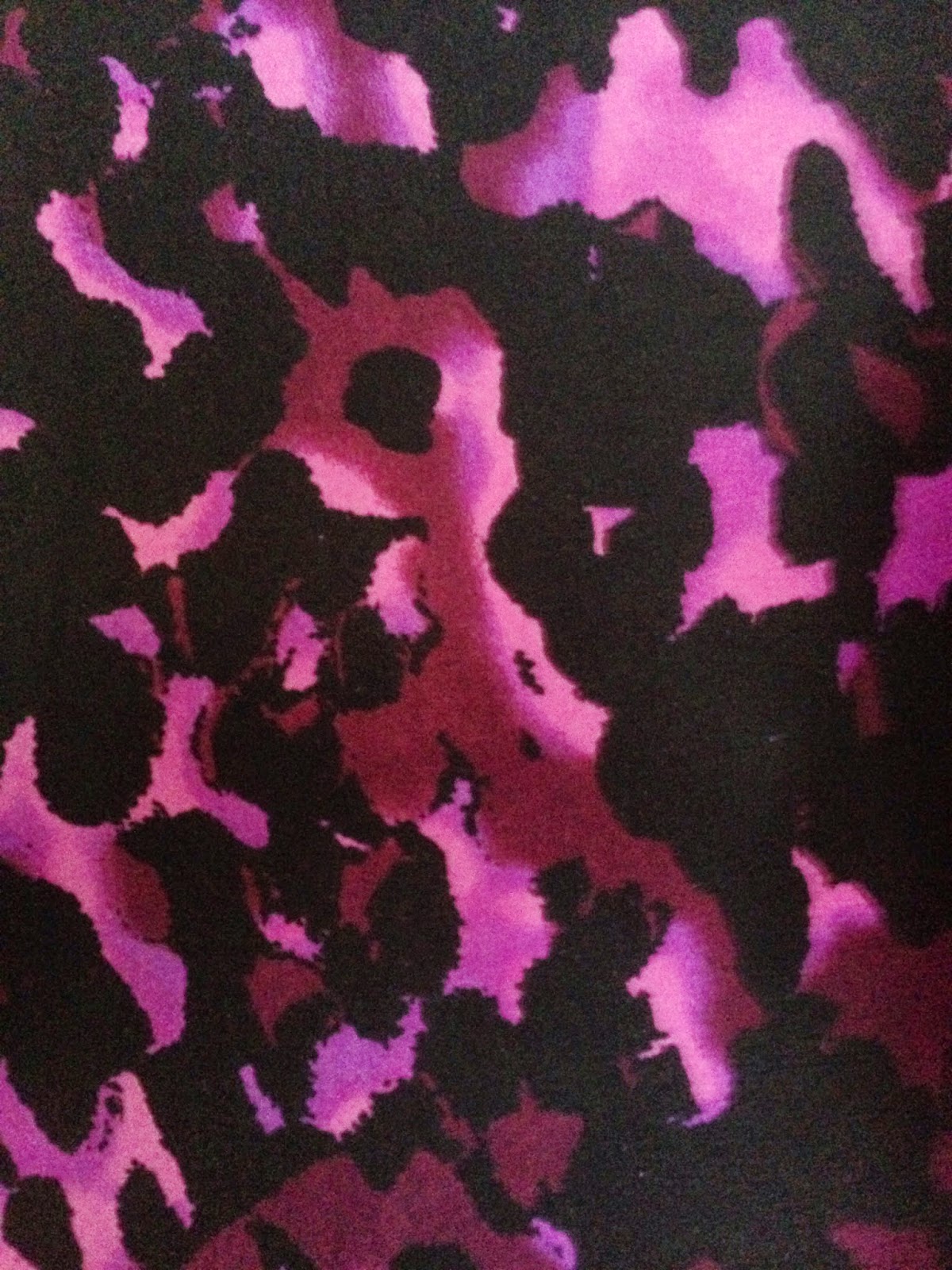 It's some kind of man-made satin bought from John Lewis in Edinburgh. It was about £16 a metre but you don't need much to make this top and the fabric is lovely and great to work with. I finished all the seams with my pinking scissors after experimenting with zigzagging and also tried turning over and straight stitching, but pinking the edges was by far the best option.

So the pattern was very simple but it suits the fabric and I also needed a fast sew after taking so long to finish the wool trousers. Here are some photos of yours truly modelling the finished work of art...well, I'll maybe let you decide that! 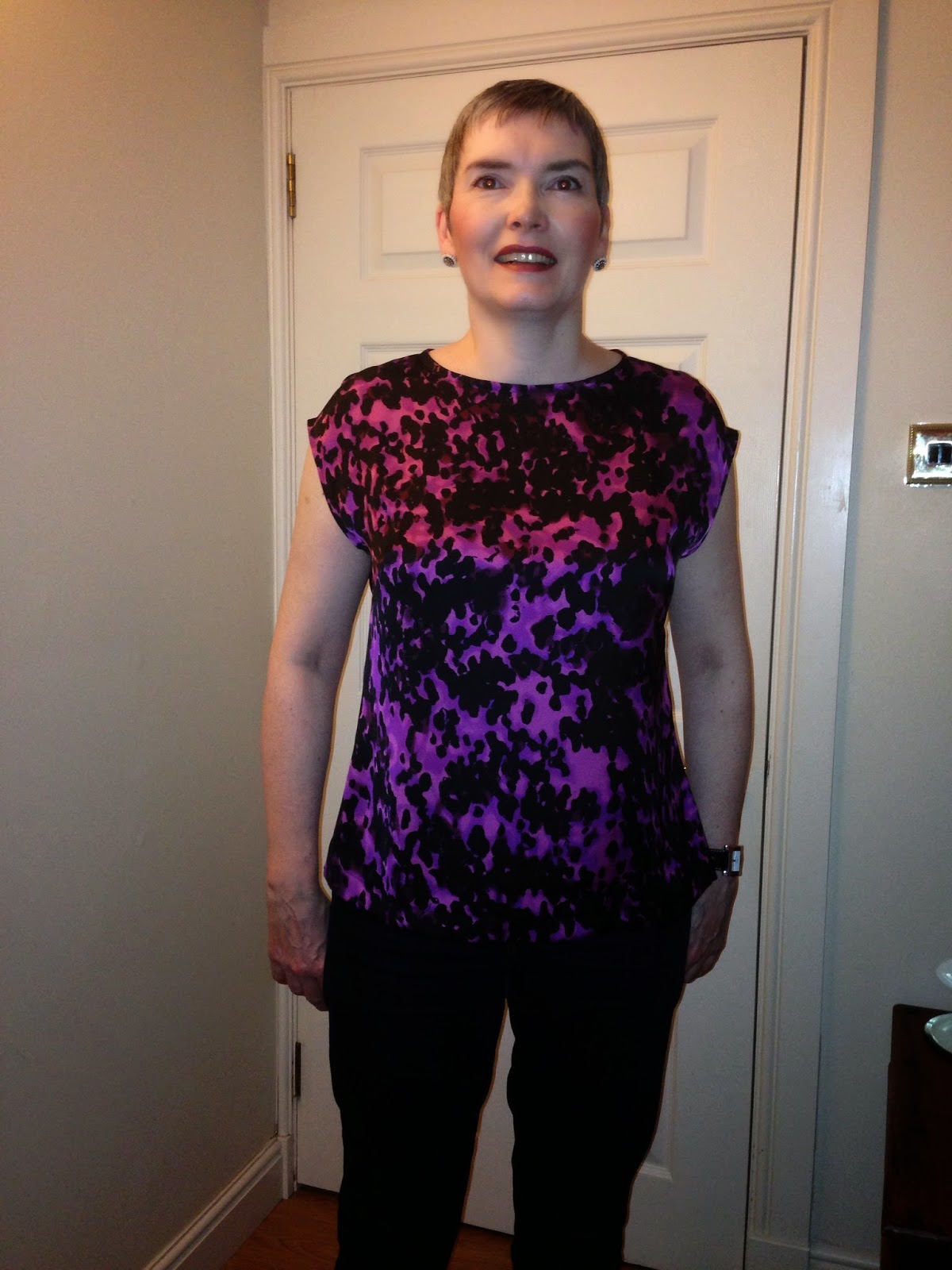 Isn't that fabric great? Just my kind of print- loud, splodgy and in bold, strong colours.

The only down side to this project is the gap at the back. I've said it before about other projects, but never listen to myself. I'm not a fan of a gap and should have finished it with a zip. But then that leads to another thing, it would be better with an invisible zip and I confess I've never done one of those. Something for 2015, I think.

I'll wear this top but I'm undecided on whether it needs a zip. It does have a lovely covered button and hand-worked button-loop though. Here's a very bad photo that makes me look like I have Olympic shot-putter's shoulders (I'm not like that in real life, honest)- 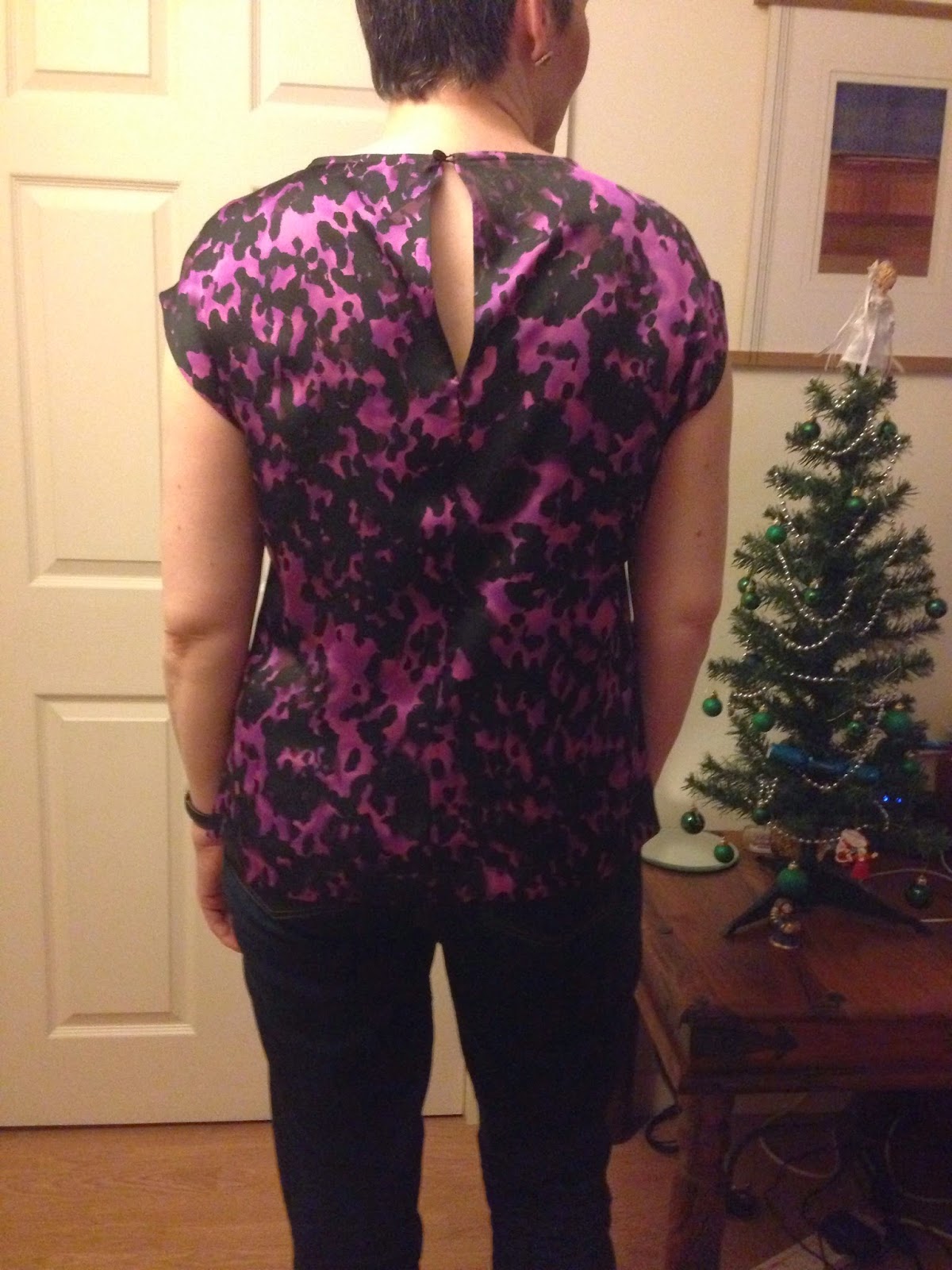 Yes, the sharp eyed among you will have noticed that that's our Christmas tree up. No, it doesn't have any lights and we don't know where they've gone since last year! We have another tree in the same room, it does have lights and looks far more interesting and exciting so that'll be a trip to the shops on Saturday...

And what's my next project? A pair of trousers but I added too much length to the rise (about 3.5") so I'll have to cut off a good 2", unpick what's left of the darts and do them again. That's not too much of a problem though. The fit looks good so it's just a matter of refining the fit after the alterations to the rise. All in all, not too bad.
Posted by Joyce at 13:47 No comments:

It was a momentous day yesterday, even though you might not have realised it. It was The Day I Finished The Grey Wool Lined Trousers. All in capitals. I've been working on them for weeks but also been diverted by other quicker sews. They are an almost exact replica of a pair I made in September...yes, they're also grey. The pattern is Burda 7250. I know some people don't like Burda but I'm fine with their patterns. So far!

The fabric is a lovely grey and black checked 100% wool from Edinburgh Fabrics. Here's a photo of my leg encased in said fabric- 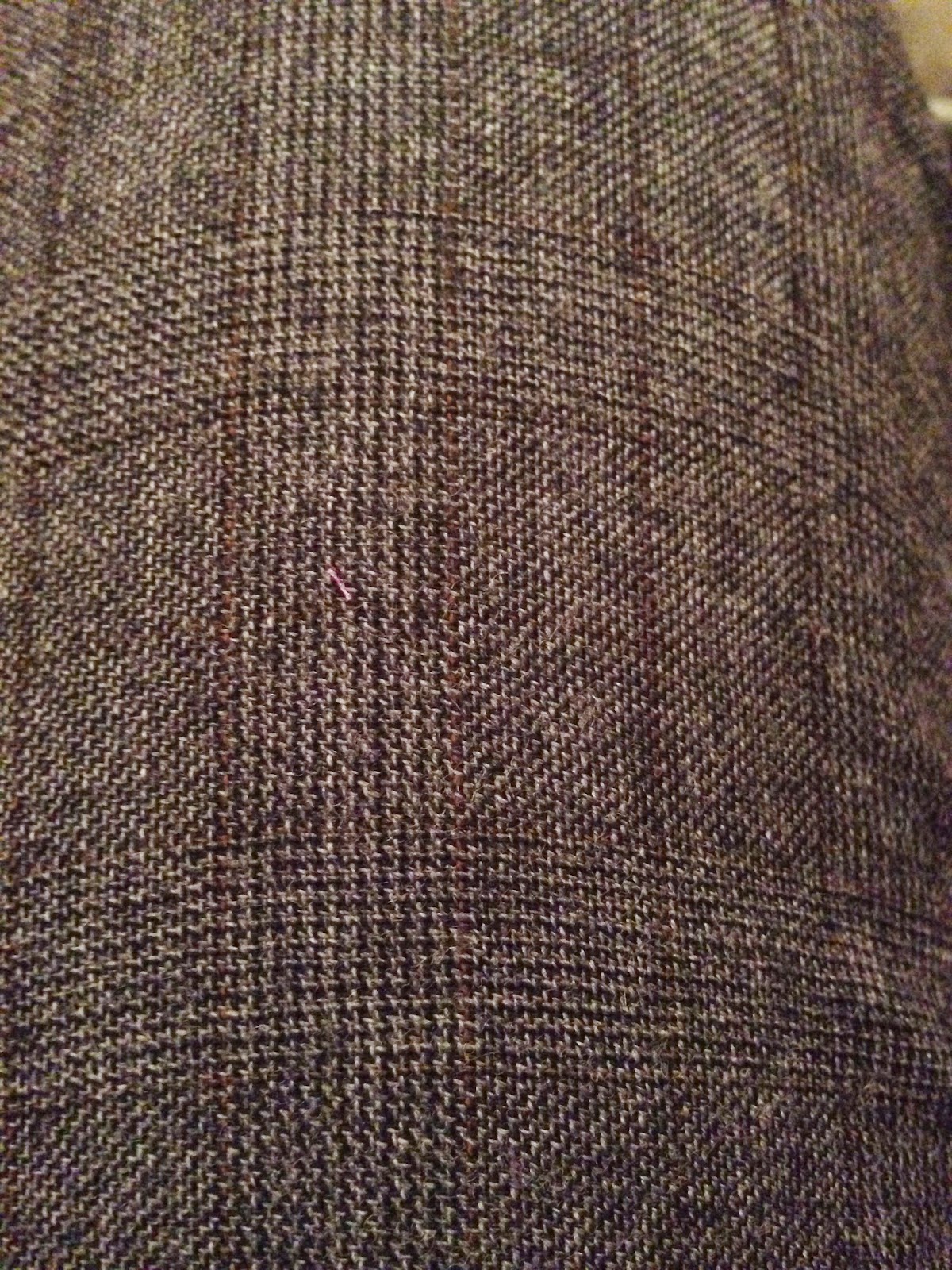 There are also large checked lines of brown running through it too. I have the feeling it's suiting fabric. It has a lovely drape and feel to it and despite being wool, doesn't seem to be scratchy.

I'm becoming more of a convert to pre-washing fabrics. Well, except anything that's 100% polyester, if you know what I mean. When the fabric was dry I steam ironed it, to make the fibres shrink. I think it's best to start as you mean to carry on with fabric and if it gets used to bad treatment now, it won't be so bad in the future when I forget to put it on a wool wash or something potentially disastrous like that. Ask me how I know all this...!

So, fabric prepared. Then I started cutting. And cutting....and cutting. I decided because of the checked pattern it would be much better to cut from a single layer of fabric. Then I could match up the checks and make sure each piece was cut on the grain.

So I cut the fabric and then cut the lining. I folded the lining in half and then cut, with a plain polyester anti-static lining it wasn't worth cutting each piece from a single layer. No checks to match, thank goodness. I cut the pocket bags using one layer of the wool fabric and another layer of the polyester lining as I wanted to reduce bulk. As usual, I lengthened the legs but that was the only thing I altered.

The fabric was lovely to sew with but it didn't half fray! I zigzagged all seam finishes, again to avoid adding unnecessary bulk. I also zigzagged the seams of the lining. That stuff sure can fray when it gets the notion! 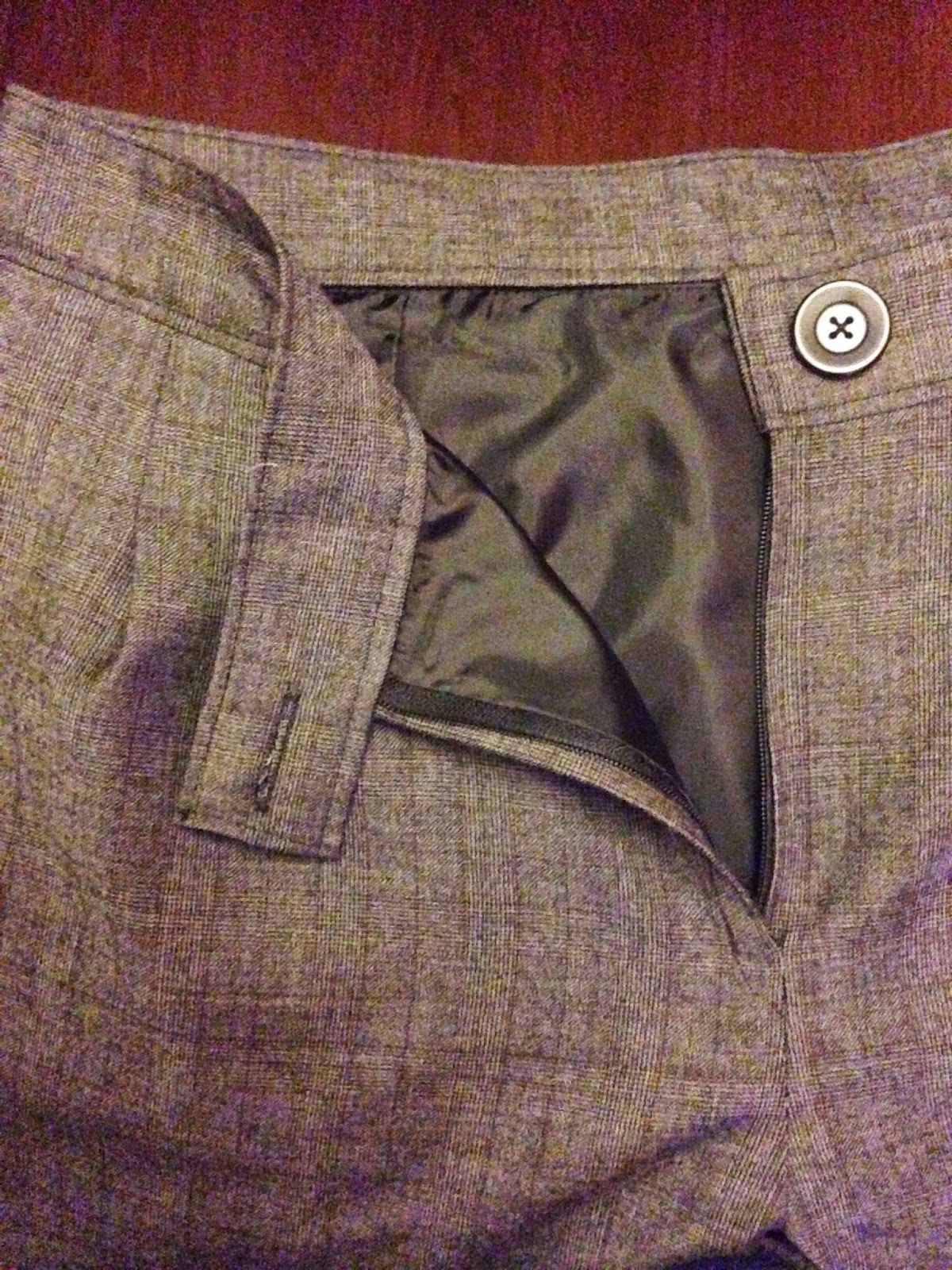 Here's a close-up of the waistband and lining and below, the pleats, zip and button. I finished the wool hems by trimming the length to about 1.5" then zigzagging and then hand stitching. I had some bias binding that I could have used but I was worried it might be too heavy. I know zigzagging isn't the neatest of hem finishes but I think it's right for these trousers. The lining hems I just trimmed then turned up twice and machine hemmed. And of course, everything looks much better after a good press!

So, all in all, I'm very pleased with these trousers and they're the first pair of lined wool trousers I've ever had or indeed, made. They did take a lot of time to make but that's because of the details like pleats at the waistband and the pockets. Without them, it would have been much quicker. The lining adds to the project time too. Just need some cold weather and I can wear them! 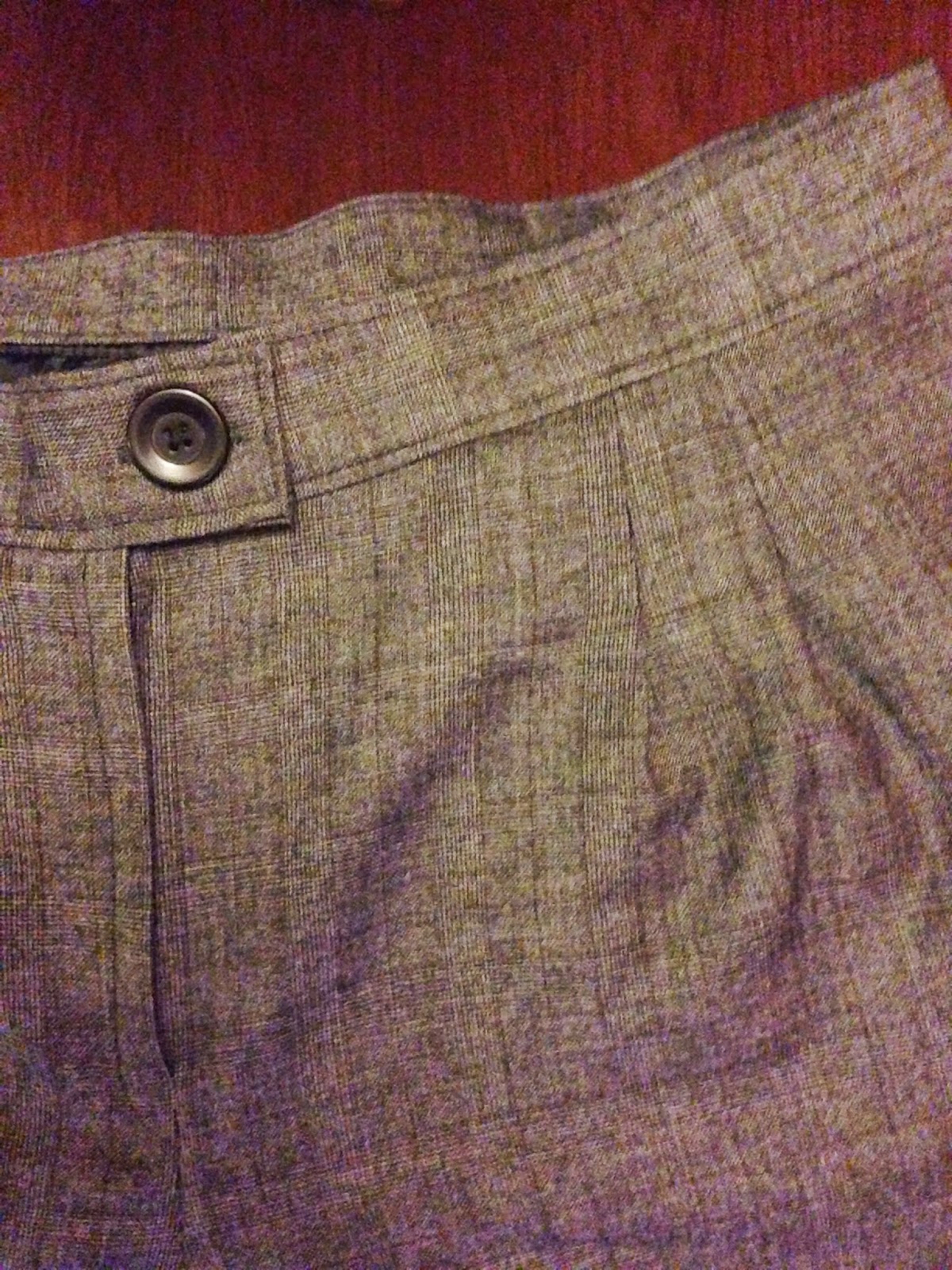 I've got the waistband fit much better this time but that could also be due to the fact there isn't any stretch in the fabric compared with the other pair of grey trousers I made. These are a much better fit and as I don't like belts and don't need to wear one with them, I didn't add any belt loops.

I finished these and started the next project yesterday afternoon. The fabric for that is bright! I'm making a top for going out at christmas. I'll be blogging about that soon!
Posted by Joyce at 13:15 No comments: 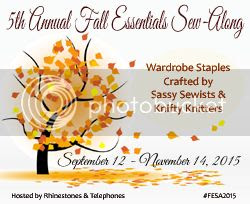