Ultimate trousers in a natural habitat 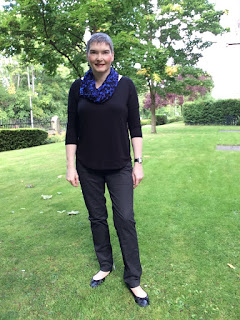 Well, I've steeled myself to take the tripod outside and take photos for my blog. This is the September challenge for the 'Better Pictures Project' by Gillian from Crafting a Rainbow. This post is really more about the taking better photos outside than about the latest pair of Ultimate trousers I've just made. However, the trousers were a work in progress that I abandoned in July/early August and ignored, then picked up yesterday, tried them on and decided they were worth finishing. Worth blogging about but dark trousers don't make interesting photographs!

The fabric is cotton with a small percentage of lycra in it. I bought it from Mandors in Glasgow when we were there in April. It has a dark denim finish to it but isn't as thick as denim. In hindsight (isn't it a wonderful thing?!) this fabric would be much better as a blouse or dress rather than trousers. They're summer trousers and I hope I'll get a couple of weeks to wear them before autumn really takes hold and I have to put them away till next year. 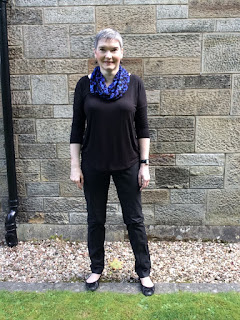 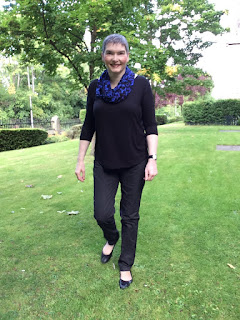 For some reason, I tried them on again yesterday. It was make or break time! So it was out the seam ripper and unpicking the white tacking thread. There's a lesson I've learnt!

So that's the trousers. Now for the September challenge of the Better Pictures Project. Find a new location less than 5 minutes from your home to take your blog photos. Good challenge. I took these in the communal garden near the flat and upped the stress levels by doing this beside a main road and busy bus route. I then wimped out a bit by doing this on a Sunday morning so only a few people were walking along the pavement. They didn't seem to bother about me and my tripod!

The first few photos I took I used a lovely stone wall as a background. I don't think they were very interesting and I posed quite awkwardly but that could be because they were the first photos I'd taken outdoors by myself. These were also in full daylight, albeit cloudy. What do you think?

The photos I like are the ones I did underneath a sycamore tree. You can see the leaves on the ground. Autumn is coming! I think being under the tree seems to have given a better light. Hey I'm no expert photographer! I also like the 'action shots' but I think it was luck that made this a good freeze-frame photo. It could have gone either way!

I used the self-timer on my ipad and set it to 10 seconds. I tried the 3 second one but that's too little and those photos were deleted. 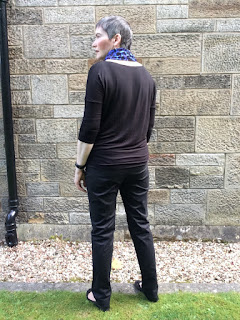 Here's a back view of the dark trousers and black jersey top. Recognise the snood? The light has highlighted the wrinkles on the back legs, they're not that bad in reality. I haven't used any filters or photo editing software or apps. I'll be interested when we get to that month! The photos against the wall seem a bit bleached out, while the other photos have a good level of colour in them.

So, to round up. This has been a good challenge and made me think about how I take photos in the future. One thing though, Saturday was pouring with rain here so it'll be interesting to see how the weather affects the limited time I have free to take photos during the winter months. We'll see how that goes. I really enjoyed doing this challenge and it's given me the kick up the b******* to go and do something about improving my blog photos! I'm looking forward to learning more in the next few months.